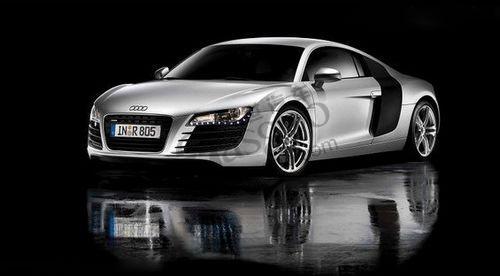 Jin Jiuyin 10, China's luxury auto market continues to make efforts, Audi by virtue of a number of models sold over 10,000, in order to create a new September sales record, for the fourth consecutive month to obtain a single month sales of luxury cars in the Chinese market. Second-tier lineup, Cadillac won the crown with 17,248 sales. 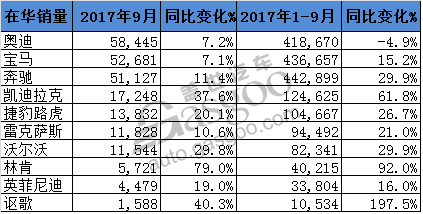 Mercedes-Benz sales in September hit a record high of 51,127 units

Cadillac sales reached 17,248 units in September, an increase of 38% from the same period of last year. It also maintained double-digit growth for 19 consecutive months. In the first nine months of the year, Cadillacâ€™s cumulative sales in the Chinese market were 124,625 vehicles, a year-on-year increase of 61.8%. Sales of the XT5 luxury SUV rose by 49% and sold nearly 6,300 units. It is also the best-selling car under Cadillac. Sales of the ATS-L luxury sports sedan rose by 40% to 5,300 units. The delivery of the CT6 sedan climbed by 65% â€‹â€‹and sold nearly 1,200 vehicles.

China continues to maintain Jaguar Land Roverâ€™s position as the largest single market in the world. Jaguar Land Rover sold 13,832 new cars in China in September, an increase of 20.1% compared with 11,515 sales figures for the same period last year. At the same time, this sales volume hit a record high this year. Among them, the Jaguar brand sold a total of 4,117 new vehicles, a year-on-year increase of 56%; and the Land Rover brand also recorded a new monthly high of 2017, a year-on-year increase of 9%, with a sales volume of 9,715 units. From January to September 2017, Jaguar Land Rover sold a total of 104,667 new vehicles in China, an increase of 26.7% compared with 82,641 units sold in the same period last year.

Lexus recently released its September sales data. According to statistics, in September, Lexus sold 11,828 vehicles in China. From January to September this year, Lexusâ€™s total sales in China reached 94,492 units, an increase of 21% year-on-year. It is worth mentioning that, in the single-month sales in September, the sales of hybrid models reached 3,312 vehicles, which accounted for 28% of the monthly sales.

Volvoâ€™s sales in September continued to continue its strong momentum, and growth is now occurring in all regions of the world. It is expected that this year will set a new sales record for four consecutive years. Last month, Volvoâ€™s sales volume in the Chinese market increased by 29.8%, and sold a total of 11,544 vehicles. The locally produced XC60, S60L and S90 are the main driving forces for growth. In addition, from January to September, Volvo sold 82,341 vehicles in the Chinese market, an increase of 29.9%.

Sales of the Lincoln brand in September alone reached 5,721 units, a 79% increase from September last year. This is the best monthly sales record of the Lincoln brand in China. In the third quarter, nearly 16,000 units were sold, an increase of 83% year-on-year. In September, the cumulative sales volume was 40,215 units, an increase of 92% compared with the same period of last year. Sales of all of its models in September all achieved double-digit growth, with Lincoln MKZ, MKC, MKX, and NAVIGATOR registering increases of 79%, 30%, 34%, and 84% respectively year-on-year.

Infiniti sold a total of 4,479 vehicles in China in September, an increase of 19% over the same period last year. In the first nine months of this year sales in China rose by 16% to 33,804 units. In addition to the redesigned SUV model, Infiniti chief spokesman Trevor Hale said that Infiniti plans to launch a longer wheelbase model called the Q50L in the coming months, and the new car will debut at the Guangzhou Auto Show in November.

We can supply big range of such stainless steel Casting Parts, including investment casting and Sand Casting

Advantage is lower cost, because the sand mold use reusable;

To copy wax casting items required first, and then into the pool with ceramic and stay dry, make with wax replica is covered a layer of ceramic outer membrane, repeat steps until enough to support outer membrane casting process (about 1/4 inch to 1/8 inch), then the wax melting mould, and out of mold. Then mold need to high temperature for many times, enhance behind the hardness could be used in the casting.

This method has good accuracy, can be used as a high melting point metal, such as titanium casting.

Construction by casting and machining

The workmanship have good production practice. Care are taken to ensure High accuracy and smooth surfaces

Besides above the general specifications, we can also supply some specific machining parts as clients' requirements.