2016 is the first year of China's non-road three-phase emission regulations. With the implementation of the new regulations, both the engine technology and the system matching of the entire vehicle have ushered in an epoch-making upgrade wave in the history of China's construction machinery development. As a leading enterprise in the construction machinery industry and an active advocate of green power, Weichai Power is naturally doing its utmost to lead the industry. 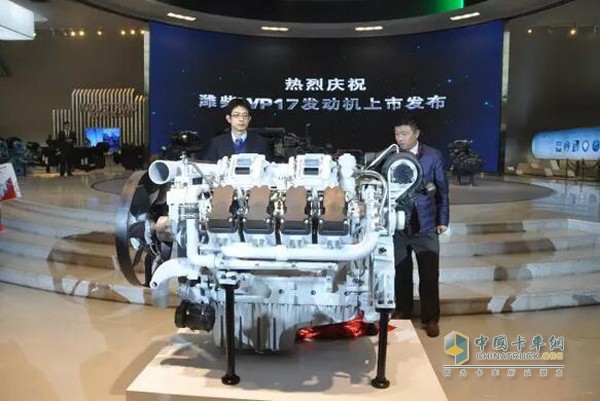 At the Weichai 2017 Business Conference Construction Machinery Power Division under the theme of â€œClimbing to the High-end to Challenge the World Firstâ€, Weichai launched the WP17 V diesel engine, which continues to use actual actions to declare itself in the industry. Shake the position of the king. Because of the large-horsepower engine with a displacement of 17 litres, it was almost unthinkable in the domestic engine industry. Its coming not only represented the latest technological achievements of Weichai, but also broke the long-term monopoly of domestic high-powered engines by foreign products. , Let China's heavy engineering equipment finally has its own "Chinese core."

At the WP17 conference site, the main assembly targets of the Weichai WP17 engine are large-scale engineering vehicles or equipment such as car cranes, crawler cranes, large-scale transport vehicles, mine cars, bulldozers, etc., and the engine adopts high pressure common rail, direct injection, and increase. Pressure cooling, SCR post-processing and other current mainstream technologies. With a bore diameter of 127mm, a stroke length of 165mm, a displacement of 16.72L, and a rated power of 603kW, a torque of 3350Nm can be output at 1200 to 1500 rpm, which complies with Euro 6/non-road four-phase emission regulations and standards.

From the outside, Weichai WP17 engine uses a V8 structure and a twin turbocharger system. In addition, the oil sump is also different from the ordinary road model, and the higher-strength engineering version oil sump is used, which can adapt to the extremely severe and harsh working environment of the construction vehicles. Therefore, the Weichai WP17 engine does not use common spin-on oil and diesel filters. Instead, it uses replaceable filter cartridges. This design can greatly reduce the cost of engine maintenance, replacement operation is also more convenient, in line with the use of engineering engine environment.

It is understood that due to the large amount of electricity used by large-scale engineering vehicles, the WP17 uses a dual-generator system that can meet a large demand for electricity; dual-recipients that are backed up also indirectly increase the reliability of the system. Reduce the breakdown of the vehicle caused by generator failure. In addition, the twin-turbocharger system of the WP17 shares a single intake port. The pressurized air is supplied to the cylinders on both sides, and the exhaust gas discharged from each side only drives the supercharger on the local side, and the independence is good. When a single side fails, the entire system will not be paralyzed and the redundancy will be higher. In addition, the WP17 engine is also equipped with Weichai Super Power engine braking system, the maximum braking power of up to 320kW, can provide safer driving guarantee for heavy construction vehicles in extremely downhill road conditions in mining areas.

Over the years, Weichai has been making big strides. Even in the context of the market's continuing downturn, Weichai still invests huge sums of money in product R&D every year. The upgrading of emission regulations has enabled Weichai to increase its product competitiveness and gain market share. Further improve. According to the report of Weichai's 2017 business conference, the market share of Weichai in the loader market has exceeded 80% in 2016, and the market share of bulldozers has exceeded 70%. The strategic markets such as forklifts, excavators, and road machinery have also made great progress. WP2 .3. WP3, WP3.2 and WP4.1 and other "Rui Power" series products have become the "killer" of Weichai's development of construction machinery for small horsepower market segments.

In 2017, not only did Weichai's full range of products fully meet industry emission standards, but it also launched a long-term strategic plan to lay a solid foundation for future industry trends and the next emissions upgrade.