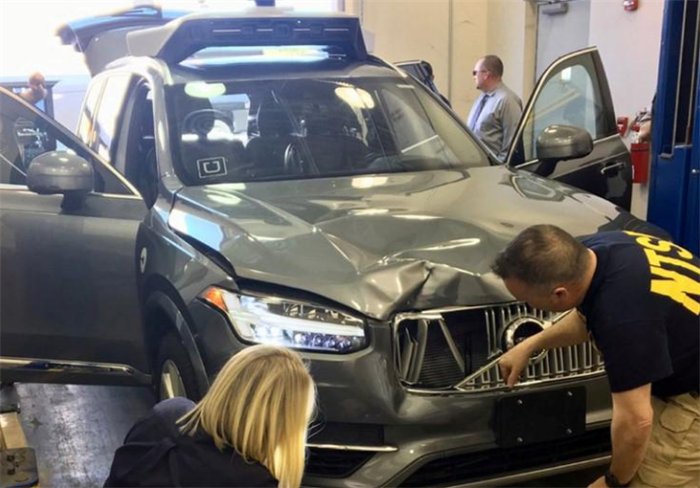 According to foreign media reports, in March, an Uber self-driving vehicle collided with a pedestrian in Arizona and caused its death. In response to the request for public records, on June 21, local time, the Tempe City Police issued a 318-page report showing evidence that the Uberâ€™s â€œsafeâ€ driver was distracted before the U.S. automatic driving accident. And has been watching the TV programs on his mobile phone. Before hitting a pedestrian who was crossing the street at night, she only looked up for half a second. The police believe that the collision can be avoided completely.

The accident vehicle was the Volvo XC90, which was running at 44 mph. In the event of an accident, Uberâ€™s autopilot vehicle is in autopilot mode. However, like other autopilot vehicle developers, Uber requires the backup driver of the car to intervene when the autopilot system malfunctions or when a difficult driving situation occurs.

The safety driver Rafaela Vasquez, a police report from Tempe City, said that according to the review of the video in the car, Vasquez continued to look down and down at the time of the trip, and at different times, she sometimes giggled or laughed. In about 22 minutes before the collision, Vasquez was distracted, the line of sight was not on the road, and he had been looking down for about 7 minutes to watch the video on the phone. Before the accident, Vasquez kept his head down for 5.3 seconds and then looked up for 0.5 seconds.

On May 10th, local time, Tempe City police detective Michael McCormick sent an e-mail to the video site Hulu for help with the investigation. He wrote in the e-mail, â€œThis is a very serious case. This case may be Because the vehicle was infringed and sued, it is important to interpret the information provided correctly.â€ On May 31 local time, Hulu submitted a record.

According to records obtained by the police from the US video site Hulu, Vasquez played about 42 minutes of the TV talent show â€œThe Voiceâ€ on the night of the accident and ended at 9:59 pm, which coincided with the approximate time when the collision occurred. .

According to the report, Vasquez may face the allegation that the vehicle was guilty of killing pedestrians. The policeâ€™s report accused the pedestrian of â€œpassing illegally across the road and not on the sidewalk.â€ In addition to the report, on June 21, local time, the police also announced a series of Vasquez alarm calls. Vasquez was on the spot waiting for the arrival of the police on the night of the accident. . In addition, there are live photographs of pedestrians' bicycles and Uber vehicles that were crashed; and the tragic screams on the scene within minutes of the incident captured by the police carrying the cameras.

It is unclear whether Vasquez will be prosecuted. The police have submitted the results of the investigation to the Malikopa County Prosecutor and the countyâ€™s prosecutor has decided that due to the conflict, the county prosecutor has submitted the case to Yawapa County. Fang, the prosecutor of Yavapai County was not yet able to be contacted later on June 21. Nor has Vasquez and his lawyers been immediately contacted.

The National Transportation Safety Board of the United States is also investigating the accident. According to a report released last month, Vasquez told federal investigators that she had been monitoring the autopilot interface of the vehicle before and after the accident and never used her personal and Working cell phone. The report shows that Uber has disabled the emergency braking system in Volvo's vehicles, and Vasquez brakes less than one second after hitting a pedestrian.

Last month, Uber spokesperson said that the company is conducting a "full security inspection" and had invited a former federal traffic officer to help improve the company's security culture. When a self-driving vehicle is driving on the road, the company prohibits the use of any mobile device by a safety driver and informs the driver that he will be dismissed if he breaks the regulations.

The accident caused Uber to suffer major setbacks in the development of autonomous vehicles. After the accident, the company closed its automated driving vehicle test program in Arizona. The company said it plans to start autopilot testing elsewhere this summer, but Uber must first obtain approval from the increasingly cautious regulators in these cities.