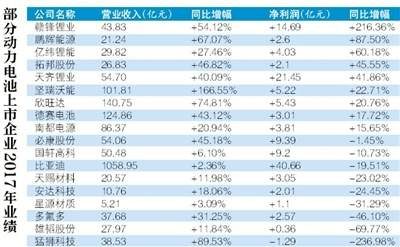 The profit of many new energy battery listed companies plummeted

Analysts in the industry believe that the power battery industry is currently facing the embarrassing situation of â€œbright eyesâ€ in the upstream and â€œdismalâ€ in the downstream. Experts predict that in 2018, the power battery industry will usher in a brutal reshuffle, and mergers and acquisitions between upstream and downstream companies will become more frequent and related companies should improve product competitiveness to cope with market shocks.

The Beijing News reporter compared the annual reports of 18 power battery listed companies and found that lithium batteries companies with large growth rates in 2017 were mainly concentrated in the upper reaches of the industry, and those using lithium, cobalt, and other raw material production all achieved significant increases. Most of the companies stated in the annual report that the main reason for the growth of the company's performance was the strong demand in the downstream lithium battery market, which led to the rapid growth of the upstream battery materials industry. It is widely believed in the industry that the new energy market will continue to expand in 2017 and will be beneficial to lithium-ion materials companies with upstream metal mineral resources.

However, due to the adjustment of the new energy vehicle subsidy policy in 2017, the domestic power battery price has generally declined, but the prices of upstream raw materials lithium and cobalt are still high, leading to the â€œdouble-sided squeezeâ€ of the mid-stream material companies and downstream power battery companies in the industry chain. "The level of profitability has also been adversely affected.

From the perspective of material companies, the performance report of the Fluoride released shows that the companyâ€™s net profit attributable to shareholders of listed companies in 2017 was 257 million yuan, a decrease of 46% year-on-year. Duo Fuduo said that the decline in performance was mainly due to the subsidy of new energy vehicles, the decline in demand for lithium salts, and other factors, lithium hexafluorophosphate prices have dropped to a certain extent, resulting in decreased product profitability, gross profit margin decreased.

The net profit of Xingyuan Materials in 2017 was RMB 107 million, a decrease of 31.06% year-on-year. According to the company, due to factors such as the subsidy standards for new energy vehicles in 2017 and the strict subsidy standards and the inadequacy of subsidy policies, the downstream customer battery manufacturers' demand for battery separator products has slowed down, resulting in a drop in net profit. Tianci Materials also said that the decrease in sales price of lithium-ion battery electrolyte led to a decrease in gross profit margin and net profit decreased by 23.02% year-on-year.

From the perspective of power battery companies, the net profit attributable to shareholders of listed companies in 2017 was RMB 36 million, a decrease of 69.77% year-on-year. According to the announcement, during the reporting period, the purchase price of raw lead ingots rose rapidly, resulting in a reduction in short-term gross profit margin and a decline in corporate profits.

Due to the cost pressure brought by the soaring price of upstream raw materials, Guoxuan Hi-Tech's net profit attributable to shareholders of listed companies in 2017 was 920 million, a year-on-year decrease of 10.73%. Anderson Technology also attributed the 2017 company's net profit fall by 24.45% year-on-year to the following reasons: The increase in the price of lithium hydroxide, the main raw material, led to the increase in the cost of lithium iron phosphate; the adjustment of new energy vehicle subsidies policy and the extension of the application period for relevant subsidies.

At the same time, BYD, one of the largest power battery manufacturers in the country, did not achieve positive net profit growth in 2017. According to BYD's data released in the 2017 annual report, its net operating profit in 2017 was 4.07 billion yuan, a year-on-year decrease of 19.5%. BYD internal personnel once revealed to the media that the sharp decline in profits was due to the subsidy withdrawal.

It is not difficult to see that for the reasons for the decline in profits, the explanations of many companies are mainly concentrated on the rise in raw material prices and subsidies. A power battery distributor reported to the Beijing News reporter that â€œaccording to the rise in the prices of raw materials such as battery materials, electrolytes, and separators, the profitability space of the power battery industry has been greatly squeezed. With the subsidies for new energy vehicles to retreat, small companies have To the point where the break-even or even losses occur, at the same time, the adjustment of the new energy policy will impose higher requirements on all aspects of the company's capabilities, and downstream companies will become increasingly difficult to survive."

It is worth noting that the problem of overcapacity of power batteries is also becoming increasingly prominent. Some experts pointed out that in the past few years, the domestic power battery industry generally suffered from the problems of surplus of medium and low-end products and shortage of high-end products, especially in 2017.

The research data of the Institute of Advanced Industrial Production and Lithium Research shows that in 2017 Chinaâ€™s new energy sources (6.640, -0.05, -0.75%) installed 44.5GWh of car battery capacity. However, it is estimated that in 2017, only 36.24GWh of power battery capacity was installed in the country. At the same time, relevant data shows that in 2017, the annual capacity of the battery industry reached 200 billion yuan, and the excess capacity of power batteries reached 157%.

The Ministry of Science and Technology recently released "2017 China Unicorn Enterprise Development Report" also pointed out that the 2018 power battery overcapacity will reach its peak. According to reports, in 2018, seven power battery companies, including BYD, Guoxuan Hi-tech, and Yiwei Lithium Energy (17.370, 0.07, 0.40%), are expected to have a combined capacity of 135 GWh and 178 GWh in 2020. According to a new energy vehicle equipped with a 45kWh battery, only the above-mentioned 7 companies can build 3 million new energy vehicles in 2018. In fact, in 2018 China's new energy vehicles are expected to produce about 1.1 million cars.

In light of this trend, industry insiders expect that the power battery industry will inevitably face more severe overcapacity in the next two to three years. The long-term surplus also means that the new energy battery market must continue to face price wars, profit declines and other issues.

In order to alleviate the predicament, the country began to expel low-end production capacity at the technical threshold. From June 12, 2018, the new "New Energy Vehicle Promotion Subsidy Program and Product Technical Requirements" will be implemented. According to the document, on the passenger car side, the minimum cruising mileage subsidy standard for pure electric passenger vehicles has been increased from 100 km to 150 km; the minimum standard for power battery capacity density has been increased from 90 Wh/kg to 105 Wh/kg.

The improvement of the technical threshold will also accelerate the promotion of the survival of the fittest in the industry. With the intensification of competition, the battery industry may face a new round of reshuffle.

A research report of the Institute of Advanced Industrial Production and Lithium Research also pointed out that more than 90% of lithium battery companies in China will be merged, reorganized or bankrupted within the next three to five years, and the number of vehicles that can truly enter the vehicle supply system will not exceed 20 Home, and production capacity will be highly concentrated to the top few.

Some analysts believe that in the long run, battery companies want to gain a firm foothold, we must establish a close alliance of industry alliances. In addition to ensuring the continued stability of the capital chain, we must continue to increase the gold content of our products.

An analyst at GF Securities (16.210, -0.17, -1.04%) told the Beijing News reporter that companies can only absorb high quality products to increase their core competitiveness and boost sales growth before digesting the impact of falling subsidies. "Survive" in the competition of new energy power batteries. The analyst believes that "the ultimate competitiveness is still products, high-quality products can not only increase the voice of suppliers in trading, but also reduce production costs and expand profit margins."