In the first six months of this year, the performance of domestic listed steel companies continued to flourish.

As of July 15, a total of 12 listed steel companies have announced a half-year performance forecast, 11 of which remain profitable. Only Zhongyuan Special Steel (11.120, 0.32, 2.96%) (002423.SZ) suffered losses. In the first half of the year, the total net profit of these 12 steel companies was up to 22.1 billion yuan, nearly three times that of the same period last year. 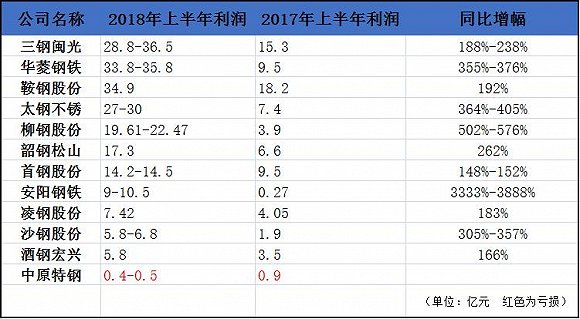 Since 2016, China has launched a steel de-capacity operation, and plans to reduce the crude steel production capacity by 100-150 million tons in five years (until 2020).

â€œThe work of de-capacity continues to advance in depth, and steel prices have remained at a high level this year.â€ In the half-year performance forecast, Songshan Songshan summarized it as the primary factor for the companyâ€™s profit recovery. The China Steel Price Index of the Nishimoto Shinkansen shows that in the first half of this year, the index hovers around 4,000 points, the highest point in the first half of last year.

Wang Guoqing, director of the Lange Steel Network Research Center, said that the sales profit rate of the domestic steel industry has stabilized at more than 5% this year, and even reached 6.09% in May, the highest profit level of the industry since June 2005.

Liu Zhenjiang, secretary-general of the China Iron and Steel Association (hereinafter referred to as China Steel Association), mentioned at the end of last year that "the effect of steel de-capacity is very obvious, the home is cleaned up, the advantageous production capacity is brought into play, and the market environment is significantly improved." China's steel industry in 2015 The overall loss that occurred in the year was thus reversed. According to the statistics of China Steel Association, in 2015, the total loss of key national steel enterprises reached 64.5 billion yuan, and half of the steel enterprises suffered losses.

According to the information disclosed by the National Bureau of Statistics, the cumulative output of crude steel in the country in the first five months of this year was 396 million tons, an increase of 5.4% year-on-year.


Waste Tyre Pyrolysis Machine can be batch and continuous working.